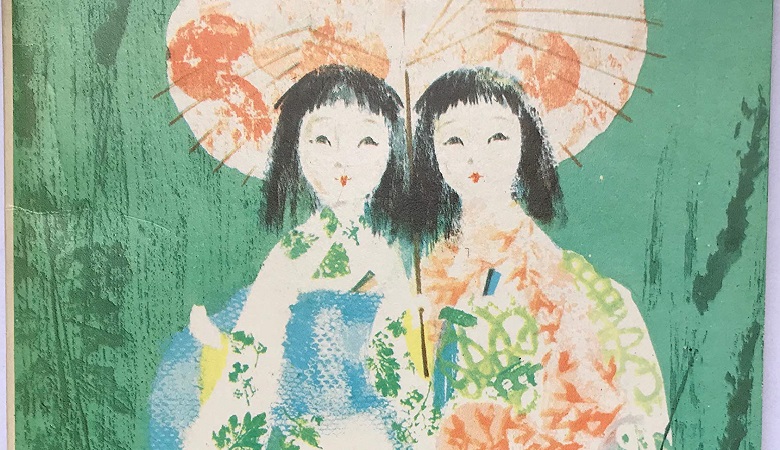 In this new blog series, Sally Thomas—author, poet, teacher, and mother—explores fiction that helps children to grow in virtue and character.

Rumer Godden’s Miss Happiness and Miss Flower is a delicate, slow-opening bloom of a children’s novella. Like other Godden novels for children—The Kitchen Madonna, for example—Miss Happiness and Miss Flower follows the story of an unhappy, isolated child who finds redemption and new life via an extended act of charity. Nine-year-old Nona Fell, sent from India to live with cousins in England, feels cold, exiled, misunderstood, and bereft, until one day a mysterious package arrives. This Christmas parcel from a great-aunt, addressed to all the children in the family, contains two little Japanese dolls, named in the book’s title. Impelled by her sympathy for these doll sisters, exiles like herself, and intuiting their homesickness in a new, alien place, Nona determines to make a home for them, a miniature but completely authentic Japanese house.

Every time I have reread this book with my children, I have lived again my own childhood enchantment and delight in the making of this house. The story recounts its construction in minute detail; there are even plans and instructions in the back, should the reader want to make his or her own Japanese dolls’ house. Godden, who lived for some years in Japan, clearly revels in the beauty, spareness, and order of a Japanese home and its careful rituals. Nona has to learn what is proper to such a home, all its furnishings and features with their cultural context. She has to imagine not only what a house in Japan would contain, but how the people in it would live, what they would value, love, and find beautiful. Moreover, though paralytically shy, she must will herself to speak to neighbors, shopkeepers, and her own family, in order to make the impulse of her heart a reality. Everything about the process of making stretches her beyond her own narrow, self-protective limits. By the time the house is finished, both it and Nona have beguiled not only the family but the entire neighborhood. In making a home for Miss Happiness and Miss Flower, Nona has learned to know the people around her, to love them and receive their love for her, to be herself at home.

Naturally, I suppose, I had always thought of Godden’s doll novels as girls’ books. And so I was unprepared for the intensity of my nine-year-old son’s engagement with the story. His emotional investment was such that hours after I’d closed the book on a particular chapter, he was still angry with Belinda, the youngest of Nona’s cousins. Belinda, jealous, feeling displaced by Nona and the attention her Japanese house receives, sabotages the whole project at its unveiling. Claiming Miss Flower, the weaker, more anxious, less hopeful of the two dolls, for herself, Belinda snatches her from the Japanese house and flings her, alone, into her own dusty, neglected dollhouse. If Nona demonstrates the goodness to which a self-absorbed child can aspire, in that instant Belinda manifests the other end of the human spectrum: the capacity even of an essentially good and jolly child to lash out in cruelty when hurt.

Belinda too is redeemed and reconciled in the end, but her pain and rage are palpable while they last. So, for that matter, was my son’s anger toward her. “I hate Belinda,” he kept saying. Children, as the novel itself suggests, often don’t know what to do with their feelings, including how to name them or to parse what it is that has inspired them. My son’s professed hatred of Belinda was in fact a proper response to something important. In this story, there are characters who can be hurt, whose happiness can be derailed, never mind that much of the drama is doll-sized. Godden’s fictional dolls are always completely animate, with human awareness and sensitivity that invites sympathy. Importantly, though, they lack agency. They cannot act to shape any outcome. Their dependence is complete. While Miss Happiness, like her name, lives in hope and trust, Miss Flower, like her name, is fragile. Anxious and afraid, she cannot believe that things will come right in the end. Of all the novel’s characters, she is the one most vulnerable to the possibility of hurt, and her being singled out for hurt registers as an outrage. It seems to me that my son’s response, as impulsive and immature as Belinda’s own, was nevertheless a noble one, rooted in care for the smallest, the weakest, the most helpless. The story had touched something virtuous in him, a sense of justice which still strikes me as deeply admirable. He had identified completely with Nona’s sympathy for the little Japanese dolls, her impulse to turn her sympathy for them into action, and her hurt and betrayal, in the moment of Belinda’s lashing out, which are amplified by Miss Flower’s suffering.

This is, I believe, one of the great potencies of a really good story: not that it tells the reader how to be, but that it calls up, from the reader’s own soul, some hitherto unawakened goodness. In Miss Happiness and Miss Flower, Nona’s intuitive sympathy for these Japanese dolls impels her to use her own agency, to act for their good, where they cannot. In this single impulse toward charity, she steps out of her constricted self and into a larger, more generous world, where her charity is returned to her tenfold. More than simply describing this growth in virtue, or prescribing it as a moral remedy, the story invites its reader or listener to a quickening of that same growth. This, after all, is what good literature does: not prescribe, but invite. If it mirrors our worst selves, it also awakens in us a vision and longing for what we can be. In this, Miss Happiness and Miss Flower, a tiny novel turning on the fates of tiny characters, does for a child what all good literature does. It awakens that vision, that intensity of engagement, that transformative longing.

Sally Thomas is the author of a poetry collection, Motherland (Able Muse Press 2020), and a novel, Works of Mercy, forthcoming from Wiseblood Books in 2022. The mother of four young adults, she lives and writes in North Carolina.