An Interview with Zackary Withers

Zackary Withers is the headmaster at Anthem Preparatory Academy, and has been with Great Hearts for eleven years. He collaborated with a group of educators to create the Great Hearts American Rhetoric senior course.

WHAT INSPIRED THE TEAM TO CREATE THE GREAT HEARTS RHETORIC COURSE, AND WHAT WAS THE PROCESS OF CREATING THE COURSE LIKE?

When we started offering senior choices three or four years ago, we added Logic, Coding, and Rhetoric. The process of creating the course had three stages. The first was a group that brainstormed with Dr. Robert Jackson. After that, Dr. Ben Mitchell, Dr. Jackson, and I went through the brainstorm ideas to provide structure and assign lessons for different weeks. We decided to structure the course like an arts class, with a focus on students creating and delivering speeches. Students learn to analyze famous speeches through what they’ve learned about rhetorical theory, and then to imitate the masters of rhetoric in their own speeches. Finally, after I and several other teachers had taught the course for the first year, I was asked to go back and refine the course. There were so many intelligent people working together and we all learned from each other. Now, I both teach the course and coach other teachers on it.

WHY DID YOU CHOOSE TO FOCUS SPECIFICALLY ON AMERICAN RHETORIC?

The goal was to give our seniors a chance to return to the American tradition, and to see how the classical art of rhetoric influenced American authors. Our students study American history in the ninth grade, and then after that they study the European and Greco-Roman traditions and the senior year great books, and then in the last year of their Great Hearts education, they get to go to Washington, D.C. and take American rhetoric, if they choose. It’s a nice capstone that brings the broader classical tradition together with the American experience.

The theory component of rhetoric and even some of the pedagogy is classical. When we were designing the course, we looked both to classical influences such as Quintilian, Cicero, and Pseudocicero, and to American influences like John Quincy Adams, who gave a series of lectures on rhetoric at Harvard to junior orators.

WHAT ARE SOME OF THE HIGHLIGHTS OF THE COURSE IN YOUR MIND—THINGS THAT THE STUDENTS AND TEACHERS GET TO DISCUSS AND PRACTICE?

The course has a threefold approach: theory, imitation, and practice. The course cycles through those pieces. Students study the five canons of rhetoric: invention, arrangement, style, memory, delivery—theoretical components. They also get the imitation side, which is when we bring in those American sources of rhetoric such as the Gettysburg address, King’s Letter from Birmingham Jail, and other quintessential examples. Then they practice by using those elements in their own creative venture. They write letters, they give funeral orations, they give a farewell address to their academy, and write declamations based on imaginary scenarios. The other key component I sought to include were classical rhetorical exercises used by Roman orators. The exercises grow in complexity and depth until you get to a defense speech in a simulated courtroom setting.

But we teach all these elements with an American twist. For example, in another exercise students choose a famous American who has died and write a funeral oration that captures their legacy, the loss, and what they stood for. They’re developing creative skills while learning about and honoring our national heritage.

WHEN A SENIOR GRADUATES FROM A GREAT HEARTS SCHOOL, HOW SHOULD THIS PARTICULAR COURSE INFLUENCE THEIR LIVING AND THINKING AS THEY ENTER ADULTHOOD?

In the classical sense, rhetoric was more a niche skill for politicians, lawyers, and state leaders, but there is a democratizing factor in the American tradition. In a democratic society, rhetoric is for everyone. How do you speak effectively to cause action? How do you express yourself well? How well do you know yourself and your audience? Those are really key skills in friendships, relationships, work, and family. It behooves students to have these linguistic skills and to hone them before they go off into the world. There is a humanizing element to that—they have to be confident and have a sense of compassion.

Students also learn to give and receive constructive critiques in real time. How was your argument? How was your voice? Did you stand confidently or do a nervous dance? Did you look people in the eye? I see so much grown in students throughout the course as they learn to get comfortable with that process. It builds.

Public speaking is something many people struggle with, and learning to do it as a young person builds character and confidence. Well-spoken, persuasive people will stand out no matter what they choose to do. 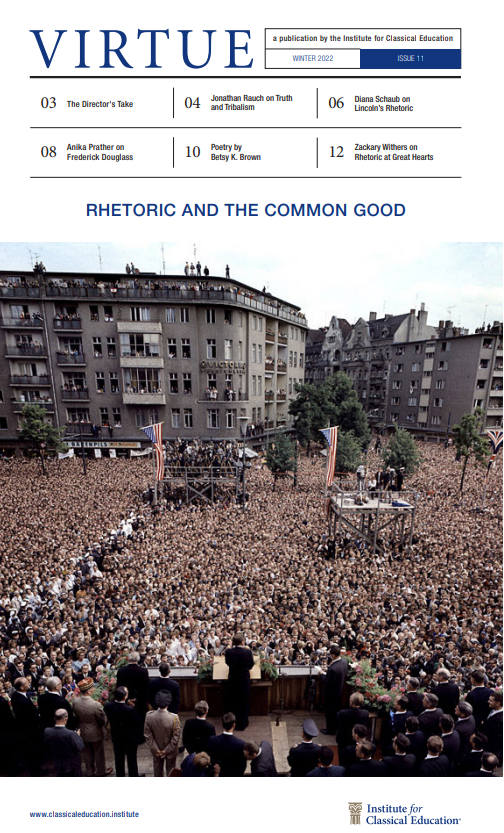