Note: The following entry is from Dr. Benjamin Storey (Furman University), a scholar and friend. He teaches the history of political philosophy and is Co-Director of the Tocqueville Program at Furman University. He has written for many journals, including Journal of Politics, the Review of Politics, The New Atlantis, and City Journal. He is currently co-authoring a book with Jenna Storey titled “What Four French Thinkers Can Teach Us About Contentment”.

Amid its successive waves of gloom, this summer brought from France the sad news of the death of a great historian of literature and art, Marc Fumaroli.  Although not well-known in the United States, Fumaroli was a towering figure in France, one of the forty so-called “immortals” of the Academie Française.  He was my teacher, and I have written about him here.

To those involved in America’s classical schools, some of the themes of Fumaroli’s work—the Renaissance revival of the classical rhetorical tradition, the quarrel of the ancients and the moderns—are of the greatest pertinence.  In particular, Fumaroli can help us answer the ever-recurring question of parents and students: “why study Latin?”

In one of his final works, The Republic of Letters, Fumaroli tells the story of the birth, in 15th century Italy, of an international network of scholars bent on countering what they saw as the “gothic” barbarism of their age.  Their chief resources were the rediscovered treasures of classical antiquity, which they read, discussed, and wrote about in the original languages, above all Latin.

This Respublica litteraria saw itself as a “society of minds within political society.” It modeled itself on another trans-political community:  the Respublica christiana or Civitatis Dei celebrated by St. Augustine.  Understanding itself as a “chivalrous and monastic order” within the broader Christian republic, the Republic of letters sought to deploy classical learning to heal, from the inside, a Christian Europe rent by schism.

Classical languages were the vital center of the republic of letters, whose members conversed, corresponded, and published in a humanistic Latin modeled on the language of Cicero.  Its great figures included scholars such as Aldus Manutius, a Venetian printer who published comprehensive scholarly editions of Greek and Latin authors such as Plato, Aristotle, Ovid, and Catherine of Siena.  The scholars of the early Republic of Letters aimed at a “return to nature and antiquity,” and many of them saw a “pre-established harmony between Christianity and classical culture.”

Over the centuries, however, Latin would be replaced by French as the international language of scholarship and diplomacy.  That displacement, effected in part by thinkers such as Descartes—who preferred French over Latin when he published his famous Discourse on Method—would involve a turn away not only from classical languages but also from nature as a standard of reference for human art and aspiration.  Descartes engaged his reader in a project not to follow nature, but to conquer it.

For those who find themselves constantly answering the question “Why Latin?”  it might be useful to remember that our technically adept but directionally dysfunctional modern age was born in conjunction with the rejection of Latin—and, with it, the standard of nature as the ancients understood it.  Fumaroli helps us understand the complex relationship between the use of classical languages and the effort to be guided by nature in much greater detail than can be explored here.  But most importantly, he helps us see that there is more at stake in the recovery of this dead tongue than the grammatical competence of our students. 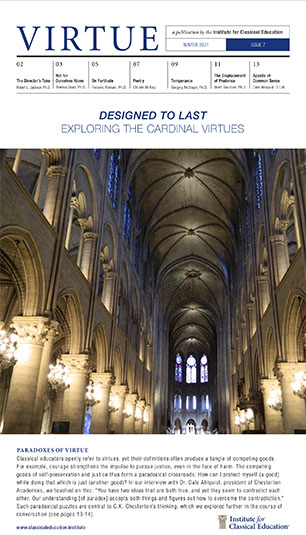