(NOTE: the following post was provided by our colleague and friend, Dr. David Rothman, who is one of the most energetic supporters of K-12 classical education in the country–and a remarkable poet, to boot!)

A few weeks ago my old friend, the gifted poet, potato farmer, and five-time San Miguel County Commissioner Art Goodtimes approached me to write a poem and deliver it both in print and performed on video for the Telluride Mushroom Festival, a gathering of obsessed mycophiles which is held each summer by the Telluride Institute. Art is a Trustee of the Institute and one of the co-founders of the festival, so I couldn’t say no, even though while I do enjoy eating some mushrooms when prepared in certain ways, I actually think they are kind of weird and I do not share the urge to go rooting about after them in the undergrowth. I know, I know….civilization might not have prospered in its early phases without fermentation; penicillin changed the world; it is yeast that gives us each day our daily bread; there is always fungus among us; and yet that spore has never sparked deep interest.

So, as the deadline approached, the muse had not yet paid a visit and I was growing desperate. All I could think about was something completely different, comet NEOWISE F 2020 C3, which was putting on a splendid display each evening in late July above our mountain home in Crested Butte, Colorado, which sits at 9,000 feet above sea level and has almost no light pollution. But I had made a promise to deliver. I had to think of something. So, under the pressure of a deadline, it occurred to me that perhaps I could embrace what was running through my mind in any event and find a way to bring comets and mushrooms together in the furnace of metaphor.

Lo and behold—it seems to have worked. Scribbling frantically late into the night, I discovered connections between mushrooms and comets unfolding more richly than I could have imagined, and somehow awaiting me in the vault of language. After all, for example, the consensus seems to be that the primary source of water on earth was comets that struck it early in the solar system’s formation, so that without such comets life as it has evolved here (including fungi, an entire biological kingdom) would not exist. No comets, no fungi. And the elliptical return of C 2020 F3 somehow resembles a life cycle, much of which takes place invisibly, buried in darkness, until it approaches the sun (once every 6,700 years or so).

Some people think that poets don’t do research, but that isn’t the case, at least if they are serious: you need to know what words mean and how they work in verse; and you need to know your subject. And if that subject is the life cycles of mushrooms and the orbits of comets, well, you need to study such things. You need to investigate mycelium and aphelion. 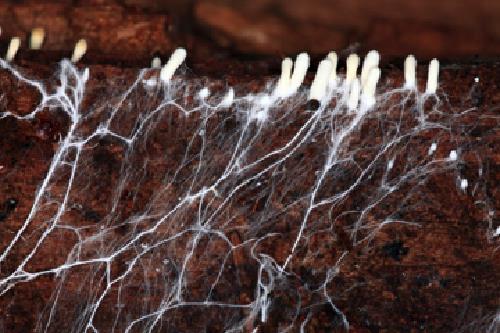 And this is where we return to education. At some point as the muse began to smile and offer verses, she reminded me as well to discharge the duty I am executing here: first of all, to express gratitude for any coincidence that inspires; and even more importantly, to express gratitude to have been prepared to take such coincidences by the hand, which in this case means having enjoyed not only good teachers of language and literature, but also, just as importantly, good science teachers, who taught me how to think about the natural world, from basidiospores to long-period comets out of the Oort cloud. To hazard another set of metaphors, comparing this outcome of education to the education that made it possible in the first place: perhaps the sun is not just a boiling vat of hydrogen, but also offers a curriculum of heavenly bodies, if we can only learn to read it; and perhaps mushrooms are not just part of a living kingdom, but also grow suddenly and silently in dark forests to show us one way to be alive, if only we can see it; and perhaps words not only say things, but also do things, if we can only learn to do them. And no one can follow the curriculum of gravity, enter the kingdom of fungi, or make sense of any of it in words, who has not had the opportunity to study such things.

And you reading these words, which are evidence of what was passed on to me and so many other by teachers in the past, are people who will continue to pass it on to others, who, in their own subsequent eccentric orbits through the darkness, will themselves carry water, light, life, and the words that name them within themselves far beyond where any of us can go alone. God bless the teachers. Carry on.

I’m not sure when and exactly where it will appear, but the text and video of my poem, “Kingdom of the Ghost,” should appear somewhere on the website of The Telluride Mushroom Festival in the next several weeks.