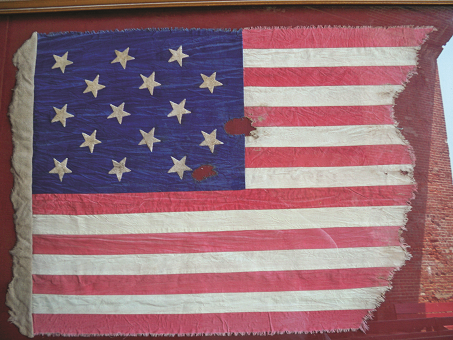 Nations have boundaries, both in time and geography. Where one ends, another begins. Each of us is born into a nation, inheriting both things worthy of our love and things needing reform. Both love and reform can be expressions of true patriotism.

How then do we understand patriotism for our nation, in relation to the dignity of all humans? Nations embody a people’s ways of living, and patriotism embraces the ideals of that nation’s ways. Cultural, economic, and political activities are simply facets of a worldview that is a nation’s way of being. Thus, nations offer ideals for the world, to be used or rejected, as other nations see fit. We see this clearly in our own Declaration of Independence. But, let us consider some national ideals that have given shape to our own, as precedents and influences on what would become the American Experiment.

Athens, Rome, and Jerusalem each have founding ideals which they believed to be universal and binding on all humans. Consider Pericles’ Funeral Oration, where he tells us why he loves Athens, with its historical development of law and its increasing capacity for freedom and democracy—with a rule of law for all. Athens, Pericles offers, teaches other nations and is thus a source of wisdom: “We cultivate refinement without extravagance and knowledge without effeminacy; wealth we employ more for use than for show, and place the real disgrace of poverty not in owning to the fact but in declining the struggle against it.” Freedom and equality. “In short, I say that as a city we are the school of Hellas… the admiration of the present and succeeding ages will be ours, since we have not left our power without witness, but have shown it by mighty proofs.” Athens promises its humanistic wealth for the nations. And it seeks immortality in its own glory.

What about Rome? If Athens brings wisdom, Rome brings peace: the Pax Romana. Like Athens, Rome promised freedom to those who accepted its law, and the peace of Rome extended to the nations through its law and administration. Similar to Athens, Rome witnessed an increasing democratization under Julius and Augustus Caesar that led to the end of Aristocracy. Virgil “prophesized” this in his theological description of Rome’s founding:

Thou shalt behold [High-souled Aeneas] …
for his warriors [will] found a city and a system.
… And a priestess shall twin offspring bear
to Mars, their sire; then glorying in the tawny
hide of the she-wolf, his nurse, shall Romulus
take up the nation, build the war-god’s town,
and call them Romans after his own name.

In this way, Athens and Rome are similar, both founded by mythic deities who inspired a universal law as the source of human freedom. Patriotism is thus manifested in both piety and duty.

Jerusalem is a different case. Where do we find the founder of Jerusalem? We find its origin with Abraham of Ur, who leaves his home city with its many gods on a quest that takes him into the desert, where he searches for the fulfillment of a divine promise. According to the first book of Torah, he is searching for knowledge of the Creator. Eventually, in the course of Hebrew history, the Divine promise to Abraham is given through his descendants to all nations. So, like Athens and Rome, we have a nation with a vision of its ideals being transmitted to the world. In the case of Israel, however, those ideals are enshrined in the revelation to Moses at Sinai: “I am the Lord your God.” God, the eternal, uncreated one. Not Jove, Venus, Mars, Baal, Asherah, Osiris, or Ra. This same deity who claims to have created all things also gives the Law that begins with the goodness of sheer Being (“I AM who I AM”). Surely there is something wonderful and awe-inspiring when the God of Abraham reveals himself, first to Israel and then the world, as “compassionate and gracious, slow to anger, and abundant in kindness and truth… Thus, Jerusalem, like Athens and Rome, claims to offer something for all nations.

All three of these nations expect their foundations to benefit the world. And, there is certainly a tension between them—a tension concerning the Good and the Divine. Each builds on a foundation of how it understands reality and value, which naturally prompts us to ask “What is the imperium sine fine (the truly never-ending empire)? “Is it a Philosophical Life, a Republic of Law, or a Divine Being?

Closer to home, we ask “Where does our nation stand, in relation to this question? “Our founding is surely summarized in the Declaration’s pronouncement, “We hold these truths to be self-evident, that all men are created equal, that they are endowed by their Creator with certain unalienable Rights…” As we think about our own laws, as well as the increasing liberty and democratization of our nation, we are faced with probing questions of reality and value—questions we must address to understand the wellspring of our equality and rights under the law.

Patriotism for our nation is thus found in our love of the founding ideals and our willingness to amend society in pursuit of the highest expression of those ideals in our time.

Dr. Owen Anderson is professor of philosophy and religious studies in Arizona State University’s New College (Glendale, AZ). He has published seven books including The Declaration of Independence and God (Cambridge University Press, 2015). He was the William E. Simon research fellow in the James Madison Program at Princeton University and a visiting scholar at Princeton Seminary.