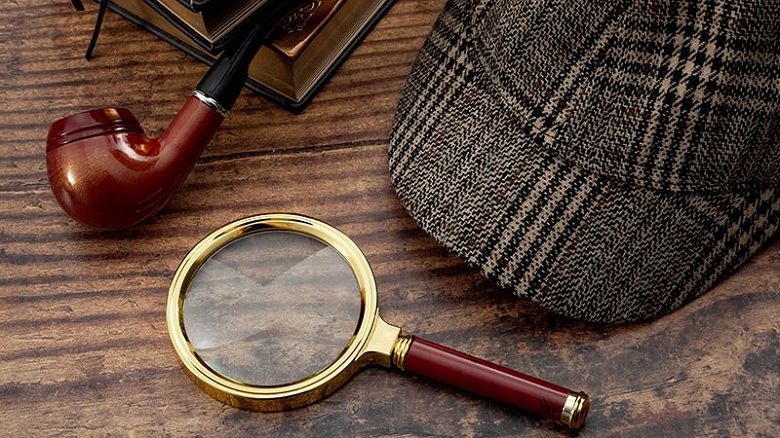 On Young Detectives and Character

In this blog series, Sally Thomas—author, poet, teacher, and mother—explores fiction that helps children to grow in virtue and character.

Something there is that doesn’t love a wall, wrote Robert Frost, but this is not going to be about poetry. It is, instead, going to deal with that something in human nature that doesn’t love what stands between us and what we want to see on the other side. We don’t love the blank in the mind that separates us from the answer to a riddle. We love logic puzzles; we hate not knowing how to solve them. The universe presents us with one mystery after another, and although we know we can’t know everything, still we want some answers. Thomas Aquinas speaks of the intellect as “the incorruptible portion of our soul,” the faculty most fully engaged in the pursuits of the contemplative life, whose end is to meditate on the Divine Truth, the ultimate end of all our desire to know, the infinite answer to every question we pose.

All this because I want to talk about detective stories. I want to talk about why, even for children, a well-chosen mystery makes a good read: not good merely in the sense of entertaining, but good in the transcendent sense, of pointing out the way of truth and virtue. Before recommending some specific stories, novels, and series for readers of various ages, I’d like to talk about why our vision of a virtue-centered education might make room for detectives.

Every mystery starts with an unsolved problem of some kind, something we, with the protagonist, can’t see through to the other side, where the truth is. It is our desire to see through that keeps us turning pages. The story proposes a wall, then helps the reader take it apart, stone by stone, until some view opens out, obstructed no longer. The detective story is simply one elemental form of what every story really is. It begins with an obvious problem: an unexplained death, a jewel theft, the disappearance of a will. Like the problem, the stakes are obvious: an innocent person will hang, a family’s fortunes will fall into ruin, an orphan will be cast out penniless into the cold. In other words, wrong will triumph.

Of course, for wrong to triumph, it has to exist. This constitutes another satisfying element of the mystery or detective story, that both wrong and right exist, vice and virtue, falsehood and truth. The sleuth’s cosmos is a just cosmos, in which human beings, though they possess the power to create disorder, may also work to restore it, and may be restored themselves in the process. Consider Agatha Christie’s Hercule Poirot. He is distinct in all his eccentric particularity, with his famous little gray cells, but he is also predictable, and is predictability becomes, amidst swirls of intrigue, a stabilizing, reassuring presence: a signal that even in the midst of disorder, order is possible.

Notably, the fictional detective rarely works alone. Sherlock Holmes’s Dr. Watson has become shorthand for what every story’s mystery-solver has: relationship. Child detectives tend to travel in phalanxes, like Enid Blyton’s Famous Five and Secret Seven. Teenaged sleuths, of whom Nancy Drew figures as the eternal paint-by-numbers icon, naturally rely on their best friends. Ngaio Marsh’s Chief Inspector Roderick Alleyn, the Oxford man, works in concert with the homespun Inspector Fox. Dorothy Sayers’ Lord Peter Wimsey leans upon the indispensable contributions of Bunter the valet, whose talents include, among other things, photography and chatting up housemaids; his adventures also culminate in his marriage to the perfect sleuthing partner, Harriet Vane. If the detective happens to be, like Ellis Peters’ Brother Cadfael, a Benedictine monk in twelfth-century Shrewsbury, then community is his natural habitat, though the story generally supplies him with some fresh young person eager to learn about murder and herb-gardening. In short, the fictional detective is never a figure of radical autonomy, but a person whose natural sphere is community, and who understands himself, or herself, even on the hunt, as part of an interdependent human order. The detective’s work represents not self-service, but service to the maintenance of that order.

All these elements recommend the detective story as a worthy literary subgenre. But what detective stories should children read? For young readers, the figure of the child detective provides an empowering hero, smart, resilient, independent, brave—and importantly, not an adult, confronting mysteries on a smaller, less-threatening, but still urgent scale. This hero could be, for new readers in the early elementary years, boy genius Encyclopedia Brown of the popular series by Donald Sobol. It might be Nancy Drew, Trixie Belden, the Hardy Boys. I strongly prefer the early titles, dating from my own mother’s childhood in the 1930s and 40s, to more contemporary stories in these series. My children in later elementary enjoyed all these, formulaic though they are, as well as Enid Blyton’s Famous Five and Secret Seven. They also loved Henry Winterfeld’s classical-Roman mysteries, Detectives in Togas and The Roman Ransom, in which a pack of endearingly unruly schoolboys save a classmate from certain imprisonment for crimes he did not commit, then thwart an assassination plot. Friends have recommended Caroline Lawrence’s series of Roman mysteries as well for the elementary years; one friend reminds me that a particular installment of Arthur Ransome’s marvelous Swallows and Amazons series, The Big Six, turns on detective work by a group of boat-loving children. Finally, though I would save G.K. Chesterton’s Father Brown mysteries for high school, Nancy Carpentier Brown’s The Father Brown Reader: Stories from Chesterton is a good introduction for readers aged twelve and under.

My own children began reading “grownup” mystery stories at roughly the same time, sometime in the middle-school years, that they picked up things like Jane Eyre. They read Agatha Christie with great avidity, strongly preferring Hercule Poirot and his eccentricities to Miss Marple and her knitting. As at earlier ages, they also gravitated toward murder-mystery-themed historical fiction, such as Mary Ray’s The Ides of April, in which a slave on the run must find his master’s murderer, or see his fellow household slaves all executed for the crime. One child at twelve or thirteen read Ellen Raskin’s 1979 Newberry award-winning The Westing Game, in which a random group of would-be sleuths race to solve the murder of an industrialist in order to inherit his millions. The child in question enjoyed the book well enough, but in contrast to these others, it strikes me now as a more cynical take on the large aims of the detective story, more logic puzzle (with material rewards involved) than morality play.

Some of my teenagers, the lovers of historical fiction, also liked Ellis Peters’ Brother Cadfael mysteries, which offer a vivid window onto life in a medieval city with its thriving abbey, caught in the tumultuous, destructive twelfth-century tug-of-war between King Stephen and the Empress Matilda for the English Crown. For the mature sixteen-and-over demographic, I would additionally recommend the British Dorothy Sayers and the British-New Zealander Ngaio Marsh and their respective detectives, Lord Peter Wimsey and Roderick Alleyn. As characters, Wimsey and Alleyn transcend the limits of the stock detective to become literary protagonists in their own right: men who not only uncover truth, but are changed by what they find.

Something there is that doesn’t love a wall. This is why we read detective stories: because they invite us into the dismantling of the wall that stands not only in the protagonist’s way, but in ours. We try to see the sleuth’s way forward with him; often we try to beat him to the great epiphany. This invitation into the protagonist’s quest, into his very character, lies at the heart of the deep pleasure we take in a detective story. But really, it’s why we read any story: to enter into a character’s seeking, to find out, see clearly, know more than we knew before. More than that, what we hunger to know, even more than we long to know whodunnit, and what every good detective story ultimately affirms, is that order can be restored, that evil never has the last laugh, that hidden truth will shine out like light in darkness.

Sally Thomas is the author of a poetry collection, Motherland (Able Muse Press 2020), and a novel, Works of Mercy, forthcoming from Wiseblood Books in 2022. The mother of four young adults, she lives and writes in North Carolina.