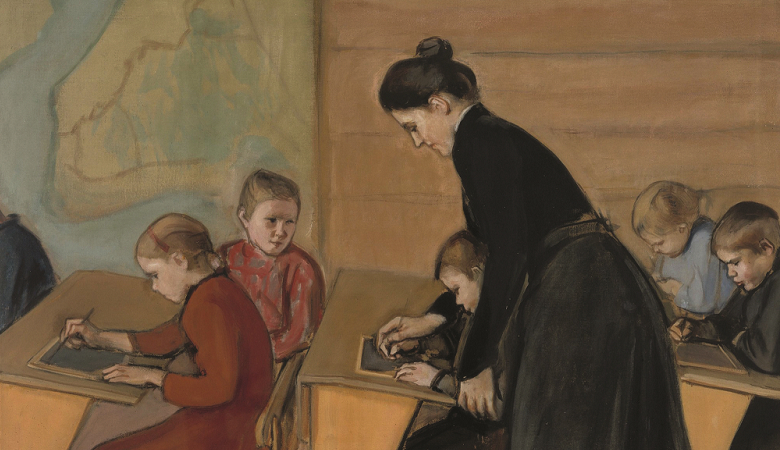 Aristotle, not without his students’ skepticism in mind, begins his Metaphysics by observing that all men, by nature, desire to know. It’s the kind of lofty statement one would find difficult to contradict as the teacher pronounces it, but leaves the student with the uncomfortable sense that, in this case, the exceptions might be the best proof of the rule—one’s own imperfect desire to know at the top of the list.

A few minutes into his lecture, however, Aristotle complicates his observation. He notes that knowledge—real knowledge—first came about when a group of people were accorded leisure, that is, freedom from work with some practical goal (or really, freedom from anything resembling a goal at all). In this case, it was the priestly class of Egypt who, presumably quite bored out in the sands with nothing to do, managed to invent mathematics. In this scenario, leisure seems to demand a complicated set of conditions. Granted to a handful of adults through the careful organization of an entire community’s assistance, it gives shape to leisurely days by taking away the necessity for the day to have any shape.

Aristotle notes elsewhere that, ordinarily, our days are organized around our purposes or ends. Usually, this end is happiness (or some intermediary task in service to it). To take away the nested series of necessary tasks that most of us live our lives at work in is a precarious kind of gift. The subsequent un-ended-ness is almost indistinguishable from boredom itself.

Such leisure does not seem to resemble our ordinary path to knowledge. To get knowledge, ordinarily, we go to school. But school is chock-full of ends and tasks and purposes, and even the most laudatory task becomes mere busy-work when it is something that someone else is making you do. It’s no surprise, therefore, that the goal of knowledge often becomes hollowed out by the desire to get school over with as soon as humanly possible. But, if this is so, should we be surprised if school often produces no learning within us at all?

Fortunately, there is another version of a human being at leisure in Greek philosophy. Socrates, who despite his frequent disavowals of possessing any knowledge whatsoever, seems to be doing rather better than the rest of us. He spends his days in casual conversation with anyone that happens by. He has mastered the art of having nothing to do, but for him, this means not boredom, but a perfect openness: a willingness to mess around with almost anything. Anything might turn out to be of value; nothing is unworthy of serious debate.

Socrates’ leisure is somewhat mysterious. Like the lilies of the field, he has no job or source of income apart from the occasional gift from a friend. His leisure is not beneficed by community policy, but is almost a piratical theft, stealing time away from the busy-work of life. It is a kind of defiance; and while it hardly behooves us to exactly imitate Socrates, his example might nevertheless provide a way forward for us—if, for us, perfect leisure remains impossible, yet learning remains the goal.

Caught inside the structure of school, whether as student or teacher, we are not unlike the priests of ancient Egypt. Leisure is built awkwardly into our days by the official designation that here, learning ought to take place, even if it doesn’t always. It makes of us a people apart, catching the odd patronizing mixture of envy and nostalgia from adults who are obviously quite glad to be in school no longer. The envy should remind us we have something they don’t. But what is it?

In a classical education, your teacher offers you the better sort of Socratic leisure every time they assign some difficult primary source to read: when they ask you not even to understand necessarily, but simply make your way through. That’s it! It’s a quixotic set of directions, terrifyingly vague. But to really learn something from a book, one has to cultivate the precarious sort of leisure where there is nothing for us to do but to read it. Usually, our minds scrabble desperately for something we think we already understand, or some maxim we can “take away.” This is not learning so much as strip-mining. We must instead seek to imitate the perfect Socratic openness to anything that catches our eye, which can only happen when we have no goal or pre-set end to distract us. The reason why leisure is necessary for learning is that nothing we busily set out to find will be as good as what we stumble into, since otherwise we would already know enough to know.

Perhaps the trick is to regard ourselves privately as pirates, in that lazy, playfully Socratic sense. Learners on the lookout for treasure, yes, but for treasure that will inevitably fall into our lap, simply by being in the right book at the right time in the midst of our busy, communal lives. In this way, I think, there is hope of preserving in us our human desire to know, past boredom, busyness, and ennui—a bold theft to attempt, but worth it.

Mary Townsend is an assistant professor at St. John’s University, department of Philosophy. She is the author of The Woman Question in Plato’s Republic (Lexington, 2017).