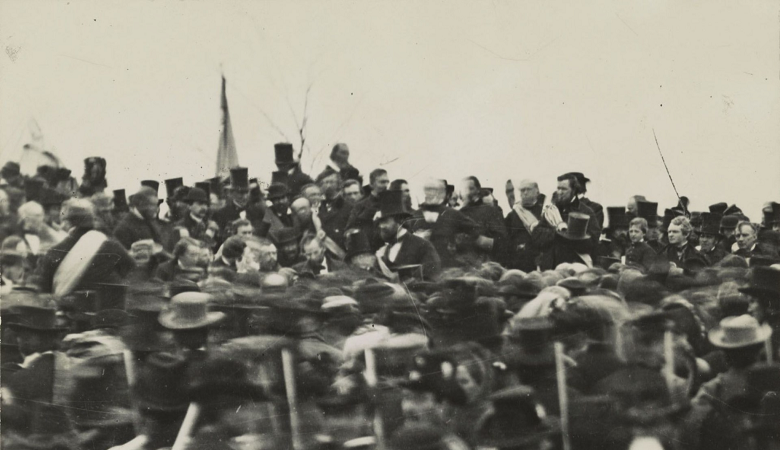 Abraham Lincoln wrote and delivered great speeches, yet he often downplayed words. He knew that mere words could not bring forth the “new birth of freedom”—only battlefield victories followed by constitutional amendments could do that. As Aristotle told us long ago, the special virtue required of those in political office is prudence or practical wisdom; making the right decision amid the press of events is crucial. But Aristotle also asserted that the human faculty of speech is essential to politics. Especially in democratic regimes, political figures rely on the spoken and written word to inspire citizen action. Lincoln was attentive to this necessary sequence of logos and praxis, the way in which our saying leads to doing. At each step of his political career, his actions were preceded and supported by extraordinary speech—speech that, by the compelling quality of its grammar, logic, and rhetoric, moved the nation.

A promise, binding oneself through words to action, is the most solemn form that words can take, and the nation’s founding charters were a sort of promise. Promises, however, can be broken, and Lincoln believed that was precisely what was happening in his day. He used speech to expose the sophistry and demagoguery of his contemporaries who were—sometimes knowingly, sometimes not—undermining and overturning the founding promise of the nation. Lincoln observed how the principle of human equality—clearly articulated in the beginning despite its egregious violation in practice—was, perhaps because that violation had gone on for so long, being lost to sight, covered over, distorted, repudiated, and forgotten. His speeches were directed toward recovering the nation’s integrity by re-conjoining word and deed, promise and performance.

Lincoln’s greatest speeches matter as intensely today as when he first gave them. Although civil war is not looming, the republic does not stand as sturdily or as undividedly as we would wish. By studying works such as the “Lyceum Address,” the “Gettysburg Address,” and the “Second Inaugural Address,” we can learn how our greatest statesman used rhetoric to repair a fractured nation.

Think of the famous last sentence of the “Second Inaugural”: “With malice toward none; with charity for all; with firmness in the right, as God gives us to see the right, let us strive on to finish the work we are in; to bind up the nation’s wounds; to care for him who shall have borne the battle, and for his widow, and his orphan—to do all which may achieve and cherish a just, and a lasting peace, among ourselves and with all nations.” Those are undeniably beautiful words, but Lincoln knew they would remain mere words if he were not successful in gentling his fellow citizens.

Rather than discuss plans for reconstruction, Lincoln used the occasion to foster public opinion that would support the policies he hoped to pursue. He did this by inviting his audience to join him in supposing that God intended the war “as the woe due” for the “offense” of “American Slavery.” The war between brothers, North and South, is to be understood as punishment for the other brothers’—the Black brothers’—enslavement. Moreover, Lincoln suggests that a just God might require the war’s continuance “until all the wealth piled by the bond-man’s two hundred and fifty years of unrequited toil shall be sunk, and until every drop of blood drawn with the lash, shall be paid by another drawn with the sword.” This vision of divine reparations requires the audience to contemplate just how much the slaves have contributed to the building of the continent since 1619, two hundred and fifty years before, and just how much blood would have to be spilled for the scourge of the sword to equal the scourge of the lash.

How does Lincoln’s invocation of 1619 help to unite the discordant parts of the nation? By emphasizing shared national suffering as the penalty for a shared national transgression, Lincoln seeks to check the moral preening of northerners and lessen their prosecutorial zeal toward the rebels. At the same time, by nationalizing (or de-sectionalizing) the blame for slavery, Lincoln does what he can to help southerners admit the error of their ways.

What consolation and promise does this interpretation hold for African Americans? While white people are humbled by being emphatically told that God was all along on the side of the bondsmen, Black people are encouraged to believe that the long delay in vindicating their right to be free was also, somehow, part of divine providence. Further, the President of the United States is declaring that God would now be justified were He to exact eye-for-an-eye vengeance on their behalf. This national confession of guilt does not do away with the need for political justice going forward, but the thought that Americans have been punished, really punished (one soldier died for every seven persons enslaved from 1619 to 1865), might incline these new citizens toward a stance of thanksgiving for their blood-bought freedom and patience for the struggles ahead. Moreover, if full justice was not demanded by God, if God was merciful to the nation, stopping short of the full blood sacrifice, then all Americans ought to be willing to imitate that generosity.

Lincoln’s interpretation of the war was designed to help Americans rise above their worst passions (arrogance, vindictiveness, resentment, hatred, and rage), clearing the way for genuine atonement and newly-forged bonds of civic affection. No surprise, “all” is the word that appears most frequently in the “Second Inaugural”—ten times in 703 words. While so much contemporary rhetoric appeals to our differences, Lincoln sought to address and unite the nation under the promise of its Founders and the hope for a just future.

Diana Schaub is Professor of Political Science at Loyola University Maryland, Visiting Professor in the Government Department at Harvard University (Spring 2022), and Senior Fellow at the American Enterprise Institute. This article is drawn from her new book: His Greatest Speeches: How Lincoln Moved the Nation (St. Martin’s Press, 2021).